Eagleyew is the home of Ezio, the owner of Eaglenest Sanctuary. This home is comprised of beautiful natural materials curated into a piece of art. Ezio has always been interested in natural building. His interest began in Mexico a long time ago, with plans to build an adobe house close to Mexico City in an intentional community. The project in Mexico fell through, however, Ezio’s passion to build a natural house didn’t. Ezio carried his passion for natural building through many stages in his life and now he had the land, so it was time to bring that passion to reality.

In terms of what the house would look like, Ezio was unsure. This is when he allowed intuition, serendipity, coincidence and synchronicity to guide the building of his home Eagleyew. As it turns out, the house looks very Mexican, as did his adobe dream many years ago. To create Eagleyew, Ezio brought together a group of artisans to assist in building it. He gave them the freedom to express their love for art and in turn, they added substantially important elements that Ezio may not have thought about.

The name Eagleyew, comes from yew wood, which is a tree that is considered sacred both here in North America as well as in Northern Europe. Yew wood has a running theme throughout the property and the home. The wood is featured and accented throughout the house due to the reclamation of a neighbor’s supply. The property itself, is surrounded with the yew tree. It is blessed with 30-35 yew trees scattered throughout the forest.

The representation of Eagles can be found intertwined within the property. Not only is the property located on Glenn Eagles Road, but visions of Eagles are frequent. In the early years of the Sanctuary, an indigenous elder would perform vision quests. Ezio would often see eagles flying above as these quests were in session. 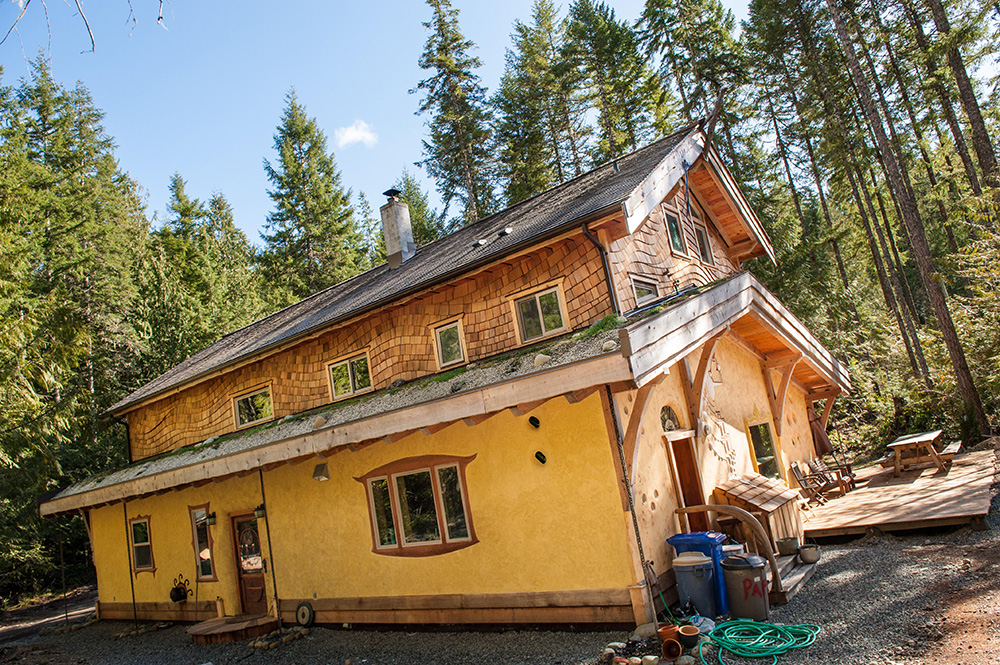 Ezio holds Eagleyew closely as the first house in which he was solely in charge of making the decisions. Finally, he was able to include all the ideas he had around natural building, sustainability and utilizing local materials. Ezio is a true believer in the ‘less than 1 mile’ diet lifestyle. In fact, 95% of the wood used to construct Eagleyew, was logged on the property. Ezio understands how outsourcing impacts our earth and the resources it uses. He believes “there is a fatal flaw in human nature, and we need massive change of consciousness that will come whether we like it or not, or from the catastrophe that we created.” As we source and buy local more often, the cost of local goods will become more accessible. The same goes for natural building, the products we are using for building come out in mass production, and that is why the costs are low. The more we use these tried and true natural building techniques, the less they will cost. 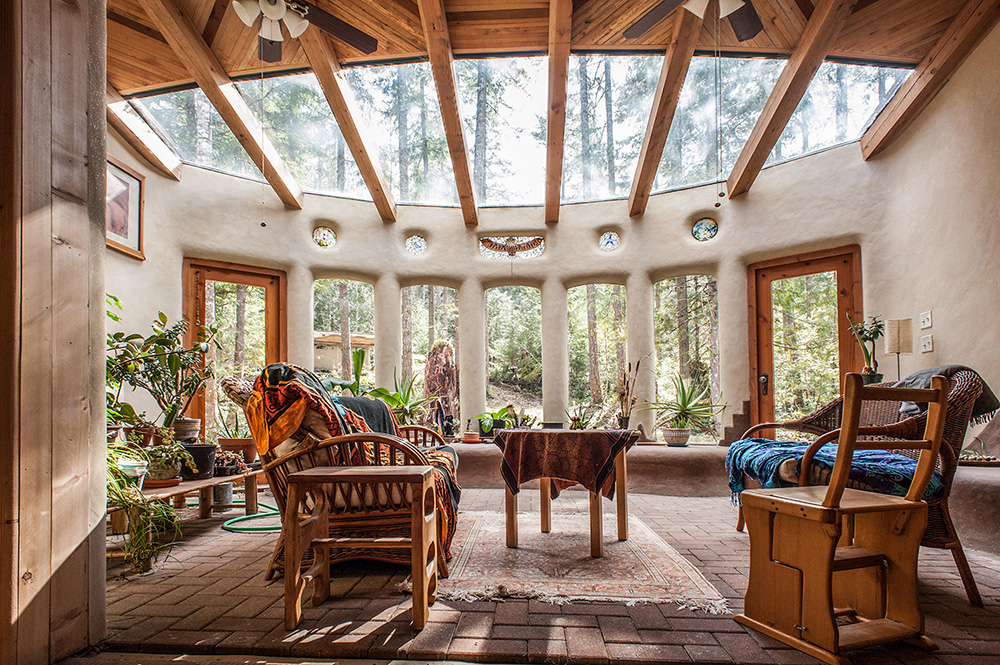 Eagle yew is built with a timber frame surrounded by light clay walls. Light clay is created by using wood chips covered with clay and sand. This light clay is pushed down into a 1ft thick wall. Light clay has several advantages. Light clay will not burn, which mean, the house is ultimately fireproof. Another important advantage living on the humid West Coast is it will not mold. The natural clay also produces negative ions, which can be very invigorating and can promote good sleep. The clay insulates in such a way that stays 17-21 degrees year-round. It stays cool in the summer and insulates any heat used to warm the house in the winter. The temperature also stays very stable. In other words, any heating done of the first floor maintains on the third floor. Radiant heat does not rise in this clay covered home but is absorbed into the walls which heats the entire home equally. Eagleyew specifically, is heated by a masonry oven, in the wintertime, one full burn a day will keep the house warm for an entire day. The artistry of this masonry oven is a must see!

Puff the magic dragon, the masonry oven, heats the house in the winter. A masonry oven creates radiant heat, it saves the heat in a big mass, which allows for lasting heat from minimal burning. Even if you don’t heat for one day, you won’t lose a lot of heat. The masonry oven is both less polluting and more efficient. This is because it burns faster, at a much higher temperature. 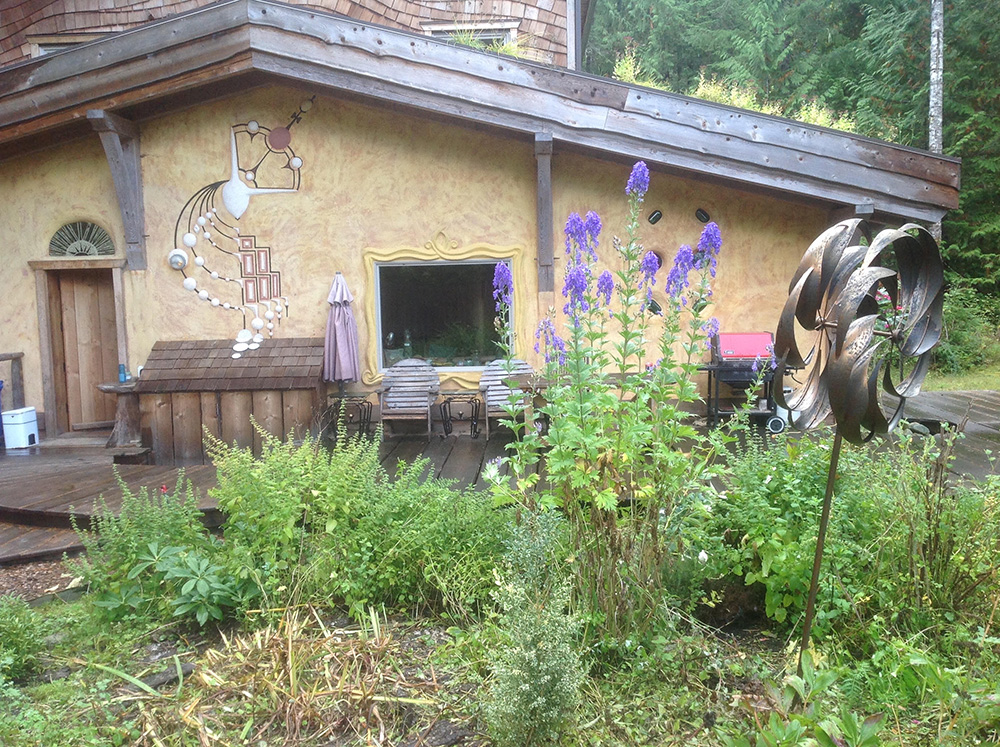 The property is complete with live roofs and detailed gardens. One garden based on traditional Finhorn, Scottish planting as well as a Versailles garden paying homage to Ezio’s time in France.  He has also become the caretaker of a few lovely alpaca companions whom keep him active and getting lots of fresh air.

Throughout Eagleyew, you will find surprise after surprise. The home is comprised of fine artistry that evoked curiosity in anyone who sees it. Ezio would like to invite you to come and explore Eagleyew for yourself!